I woke to the sound of bells chiming, summoning people to early mass and a golden glow as the sun rose over Grand Harbour. This was early morning Valletta. Small fishing boats sailed back into harbour with fresh catches whilst huge tankers were nudged out to sea by tugs. Standing precariously on my narrow hotel balcony I breathed in the sea air and watched the sky and water change colour as the sun rose.

Grand Harbour has seen a lot of history in Malta. It looked peaceful as I watched the sun rise but it has seen many major events through the centuries. St Paul was washed up  This is where the Knights of St John arrived in medieval time. In the St Elmo area it is where the Great Siege ended with Christians thrown into the sea. During World War One troops arrived from Gallipoli for medical care. And in 1942 the oil tanker Ohio arrived with supplies, breaking the siege that Malta had endured. This is where, in 1943 the Italian fleet surrendered. 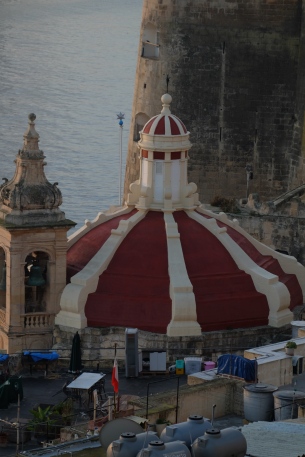 I walked along the harbour road here, past old cellars once used by knights and past massive fortifications used to defend invaders. Cruise boats lingered just past the Three Cities as did expensive looking yachts. Ahead, and near St Elmo was the breakwater footbridge giving a different view of Grand Harbour.

Walking along the harbour walls you can find yourself imagining what it must have been like at any period in history and how this small island has seen so many momentous events. It was the perfect introduction to my exploration of this beautiful city.